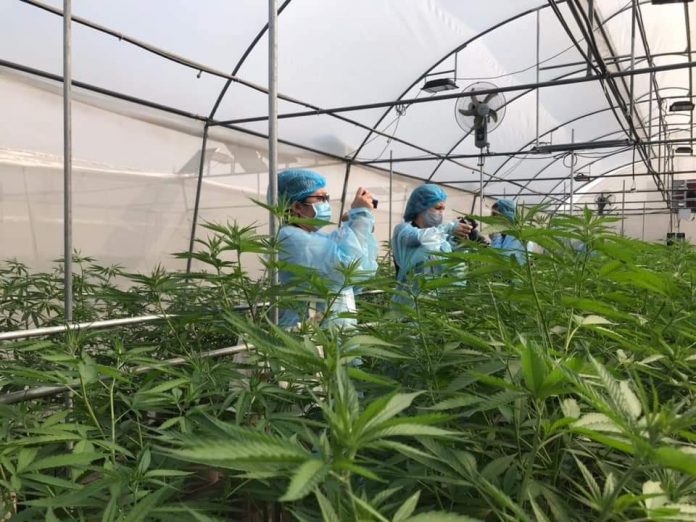 “I hope that Thailand becomes the Silicon Valley of cannabis for Asia,” the clinic’s Thai partner, Julpas Kruesopon, told Asia Times. “Or as most people in Thailand call me now, ‘Mister Weed.”

“I welcome Israeli companies. I welcome European companies. The key is to grow the industry,” Julpas added.

Medical marijuana is now legal in Thailand, and the Herbidus Medical Center has just opened up along Bangkok’s main Sukhumvit Road. This makes them the first international company to have an operational presence in the Asian legal cannabis market. The center is a joint venture between the US and Thailand, and it’s already attracting a lot of attention.

The Herbidus Medical Center offers a variety of services, including consultations, product advice, and even massage therapy. With so many people interested in marijuana, the center is sure to be a success. So far, they seem to be off to a good start!

The US-Thai joint operation “makes us, to the best of our knowledge, the first international company with an operational presence in the Asian legal cannabis market,” Audacious CEO Terry Booth explained in a statement.

Julpas claims that this operation is “absolutely” the first joint cannabis clinic that has a foreign company located in Thailand.

This “will be an exceptional opportunity to establish the Audacious brand internationally,” Booth said.

“Under the deal terms, Audacious is not required to provide capital for construction, working capital or other purposes,” the company reported in November.

“Audacious will provide advisory services, operational intelligence, including cultivation, manufacturing and product development, and expansion of brand visibility in Thailand and beyond,” the company highlighted.

“It’s going to help Thai products be sold in the US and Canada too,” Julpas explained.

Australis Capital Inc (CSE: AUSA) (OTC: AUSAF) – conducting business as Audacious – has partnered with a Thailand-based food manufacturer and distributor, NR Instant Produce, along with its subsidiary, Golden Triangle Health, which is co-founded by Julpas.

Julpas says that sleep disorders are the number one issue that people are coming to the clinic for. The clinic offers a THC (tetrahydrocannabinol) oil and a CBD (cannabidiol) oil that are legally manufactured and distributed by the Government Pharmaceutical Organization of Thailand.

“Each customer that comes in, per ticket that we’re getting, is around $125 before they walk out,” said Julpas. In 2018, Thailand became Southeast Asia’s first country to legalize medical cannabis.

In 2019, just before he became health minister, Anutin Charnvirakul said that Washington’s “political propaganda” throughout the 1960s and 1970s intentionally fooled Thailand into promoting marijuana as an “addictive” narcotic.

“During the Vietnam War, the reason why the US made the announcement that marijuana was part of the narcotic drugs was because once all the soldiers consumed this kind of substance, they could sleep. It made people calm down. It didn’t make people become aggressive,” Anutin explained.

Bangkok seems hesitant to legalize marijuana for recreational use. This is in part due to the city waiting on Washington to legalize it federally in the US. If it’s not legal stateside, banking and treaty arrangements between the two countries could become an issue.

A minimum of 10 legal clinics, which are overseen by the Health Ministry and other officials, have been responsible for treating hundreds of thousands of Thais for both common and serious illnesses using CBD-dominant cannabis oil.

However, the Kingdom lacks locally grown and processed medical-grade cannabis. Thus, it hasn’t been able to achieve the level of production it needs to fuel Thailand’s cannabis needs.

For instance, Daycha Oil, produced by one of the Kingdom’s top medical cannabis practitioners, Siripatra Daycha, has been unable to keep production high enough to meet the demand. This is one of the most popular CBD-based oils that’s currently distributed by the Health Ministry.

Most of the time, the illicit market consumes and distributes THC-heavy formula that’s been publicized online by the Canadian cannabis activist, Rick Simpson. However, cannabis, along with hemp and other products, will become even more legal.

“In July, it [THC and CBD cannabis] becomes a non-narcotic. And we can start shipping things in. Probably September,” Julpas explained.

However, recreational use cannabis is still prohibited in the Kingdom.

Audacious makes THC oil that is much stronger than what you would find in Thailand. This oil could be purchased by Thai medical facilities to treat patients and allow officials to research higher doses. A stronger THC treatment would be classified as “research” – which will become permissible under medical supervision in July, Julpas predicted.

The joint venture is also seeking other Thai partners to develop non-intoxicating CBD products. Some of the options include beauty creams, herbal medicine, spa treatments, and beverages.

Through other partnerships, the company would be able to produce a wider range of products that could be infused with CBD, giving people more options for treatment. It would also allow for more research to be done on the effects of CBD.

CBD products are becoming increasingly popular in Thailand. You can find them in shopping malls and restaurants, often with big cannabis leaf logos. However, compared to America’s sophisticated marijuana technology, Thailand is behind the curve.

“We are at the very basic start of the cannabis business here. There’s really not a cannabis THC farm like in the US with the quality control,” Julpas explained. “It’s going to be a while before Thailand can actually get to that level.”

With this being the case, Audacious – along with other US and foreign companies and investors – several opportunities are available.

Golden Triangle Health is teaming up with Khon Kaen University in Thailand to cultivate 1,000 acres of hemp. This will allow them to create CBD and other hemp-based products.

However, the university’s education and technology are not yet developed enough to create medical-grade products on a large scale.

“We need to find a way to extract more efficiently. Right now, the yield is not very good. So I think that is a real opportunity for US companies,” Julpas explained. “You can only do that with great technology.”

Furthermore, “product tracking, from the seed to the grower, to the flower, to the extraction. There are really not a lot of companies in Thailand that can do that. I think that is something American companies can do.”

As marijuana legalization spreads, the potential for medical cannabis tourism is increasing. Businesses are beginning to see the potential in offering vacations that include cannabis treatments.

There are many benefits to medical cannabis tourism. Cannabis treatments can be used to help alleviate a wide variety of conditions, from chronic pain to anxiety and depression. This type of tourism would also provide an opportunity for people to learn about the plant and its various uses.

“The number one market, I truly believe, for Thailand, cannabis use is actually not going to be Thais. It’s going to be tourists,” Julpas explained. “Tourists from India, from China, from Europe, who come here. China has a billion people who can’t sleep.”

At this point, Thailand has a “first-mover advantage” is Southeast Asia due to the liberal nature of Bangkok’s cannabis laws.

“Thailand has a real advantage. We have our own strain here … Thai Stick … it’s a very famous strain,” Julpas said. “And we have something that other countries don’t have.”

He’s referring to Buddhist-majority Thailand with the possibility to work with various other cannabis producers, like Muslim-majority Malaysia and Indonesia.

“In Malaysia, in Indonesia, there’s a religious aspect to it. Which we don’t have, right? Buddhists, we’re cool, we’ll smoke dope! You can quote me on that!”

Julpas is confident that Thailand has a lot to offer the cannabis industry. The country has a liberal attitude towards cannabis, and its tropical climate is perfect for growing the plant. The potential for medical cannabis tourism is also great.

American companies can benefit from partnering with Thai businesses to help develop the industry. Thailand has a “first-mover advantage” in Southeast Asia, and its tropical climate is perfect for growing cannabis. With the right businesses in place, medical cannabis tourism could become a billion-dollar industry.

Louis Leveyhttps://www.nostringscontent.com
Louis Levey is the Content Success Manager and Founder at No Strings Content. He's passionate about cannabis, sustainability, and helping businesses use content marketing and SEO to attract, educate, and convert audiences. His hometown is Boca Raton, Florida, but he currently lives and works remotely in Chiang Mai, Thailand.
RELATED ARTICLES
News