How Long Does THC Stay in Saliva Glands? 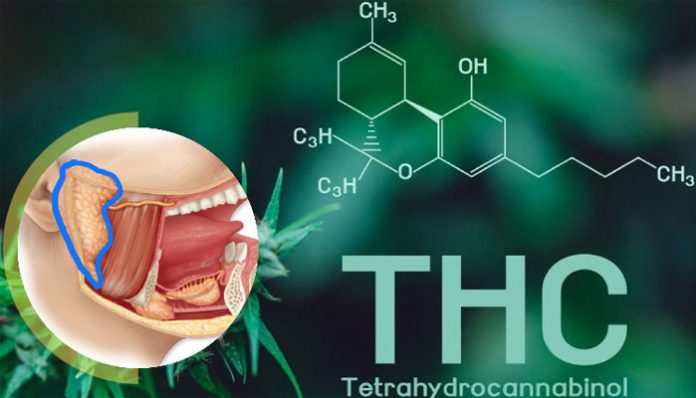 How long does THC stay in saliva glands, anyway? That’s precisely what you’re about to find out!

Cannabis drug tests are available in a variety of forms, each with its own set of difficulties.

Blood tests are invasive, urine tests are easily fooled, and hair tests are susceptible to environmental contamination. Oral fluid testing is a saliva test that avoids the problems associated with other types of cannabis drug testing.

As a result, oral fluid testing is quickly becoming the new standard for roadside drug tests because of its non-invasive and practical nature. An oral fluid examination can be done promptly unlike blood testing – another test that estimates recent cannabis consumption.

THC’s concentration in blood may drop by 90% in 90 minutes, which means it’s more difficult to detect if it takes time to get the sample to a testing facility.

Oral fluid tests are becoming increasingly popular among employers as more and more states legalize medical and recreational marijuana. It’s not surprising that people are concerned about how long THC remains in their saliva.

Keep reading for more insight into how long THC stays in saliva glands.

How Long Does THC Stay in Saliva Glands, Reddit?

We went to Reddit looking for answers and were not disappointed! Here’s what Reddit users had to say with their anecdotal evidence:

“24-48 hours depending on how much you smoke. I had to take one about a month ago. I brushed my teeth twice before I went then I rinsed my mouth out with a mixture of 90% water and 10 % hydrogen peroxide! I also was sucking on mints before I went in just in case since I’m a heavy smoker. You should be totally fine, really easy to pass!!”

“24 hours. I’ve had to take a few pre-employment swabs. I don’t blaze the day before.”

As you can see, the anecdotal evidence varies, and there could be external forces impacting the tests. But it seems between 24 and 48 hours later, you should be good to go.

What Does the Test Check For?

This is where oral fluid testing distinguishes itself. Oral fluid tests look for the THC that was actually consumed rather than its metabolites, which may remain in the body for days.

As a result, it provides greater evidence of recent cannabis usage – and even if a positive test can’t precisely estimate impairment, it has the ability to trigger legal ramifications.

THC is absorbed through the mouth during cannabis consumption. It also circulates in people’s oral fluids. This applies whether you smoke marijuana or had some edibles.

It also requires the test subjects to not eating or drinking anything for 10 minutes before testing.

How Long Can Cannabis Be Detected?

Marijuana can be detected in saliva for 1-3 days after the last use for occasional users and 1-29 days for chronic users. following amounts of time after last use.

Those who have a quick metabolism may absorb the THC molecule through their saliva more quickly. Metabolism has been shown to influence the length of time THC may be detected via saliva.

The higher amounts of THC you use, your chances of testing positive rise. In contrast, a saliva test will be far less reliable if you prefer weed with a more balanced cannabinoid profile. Only THC is detected by saliva drug tests.

It might take longer for your cannabis to be eliminated from your body if you have edibles. When you inhale THC, it enters your circulation straight away. However, the time taken for THC in an edible to pass through the digestive system is considerably longer than that of THC delivered via inhalation.

If you’ve only smoked one puff in the last few months, there will be less THC present. It won’t stay long. If you’re a heavy smoker, however, your system will be saturated with extra THC and THC COOH chemicals. The substances remain longer in the saliva of a heavy user.

The sure way to get weed out of your system is to stop using it. Chronic smokers may have to stop for a month until THC gets out of their systems.

However, some people try various methods to test negative for the THC oral fluid tests including using a specific mouthwash, brush teeth and mouth more thoroughly and frequently, drink lots of water and eat high-fat food.

If you want to know how to pass a drug test, we recommend that you use cannabis only occasionally and abstain from it for at least 3 days before the day of your oral fluid test.

We hope this blog post was helpful and informative!