The Ultimate Guide to Weed Measurements 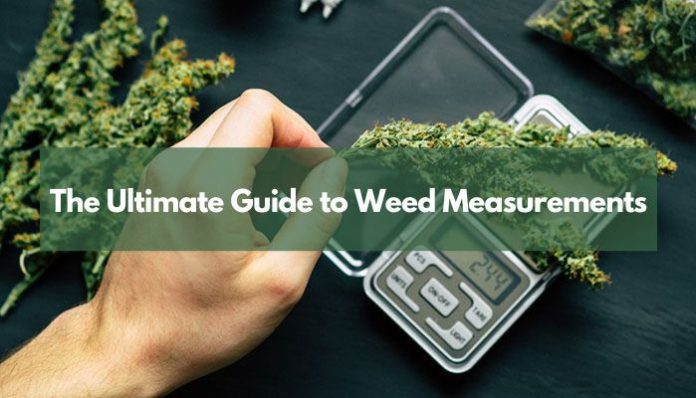 Curious about weed measurements? Ever wonder how many grams of weed are in an ounce?

Here’s our ultimate guide to weighing bud and extract in the cannabis world!

Even if you’re a pro at rolling joints, there’s always more to learn about weed measurements. In this ultimate guide, we’ll go over the most common units of weed measurement and how to convert them.

Whether you’re new to weed or just looking to better understand how it’s measured, this guide has you covered!

A Gram of Cannabis Flower is a Dime Bag

A gram of weed is the smallest weight of cannabis flower you can purchase. It’s also the most common weed measurement. Cannabis is generally measured in grams as the metric unit – unless you’re buying in bulk!

The proper weight should be 28 grams in an ounce. If you have more cannabis in your bag, you likely got a good deal!

The average joint has 0.32 a gram of weed. Thus, a gram of your favorite bud may be rolled into around three joints. A gram of weed typically contains just a couple of buds.

Slightly less than a gram of weed, usually a .7, is also known by the slang term, “dime bag” because it traditionally costs about $10 to buy. However, some places use different slang terms, and the term dime bags may refer to the smallest amount of weed purchases.

These days, the dime bag measurement is no longer the go to for those looking for a small bag. Most of the time, the smallest bag available is a gram.

How much is a gram of weed?

Nowadays, the prices vary depending on the quality and type of cannabis you purchase. You can expect to pay more for top-shelf strains, but the average dime bag still costs between $12 and $20.

Two Grams of Weed is a Dub Sack

The next amount of weed people purchase is 2 grams of weed. This amount is sometimes called a dub or a dub sack.

Traditionally, a dub is around two grams of marijuana. But some people use this weed slang interchangeably with a dime bag.

Oftentimes, a dub refers to a $20 bag of weed. The actual weight of the weed in a dub will depend on how much weed costs in your area. If the weed weight is 2 grams, it would be enough for 5-6 joints.

How much is 2 grams of weed?

Some dispensaries sell 2 grams of marijuana in a small plastic bag for more than $20, but it is a bit less expensive than purchasing two single-gram bags.

An Eighth of Weed

An eighth is a short form for an eighth of an ounce. It is the most common purchasing amount for weed that equals 3.5 grams, which is enough for 10 joints.

To be precise, it should be 3.54 grams of cannabis but it is an industry-standard practice to round it out to 3.5 grams and to round out the weights to the nearest gram when converting from the imperial system (ounce) of measurement to the metric system (gram).

How much is an eighth of weed?

There are many slang terms for an eighth of an ounce, including the eighth, half a quarter, cut, and slice. Purchasing weed by the eighth can save you some money. In legal dispensaries, an eighth (3.5 grams of weed) may cost from $25 to $35, while a dime bag (1 gram) may cost $15 to $20.

A Quarter of Weed

A quarter refers to one-quarter of an ounce, which is roughly equal to seven grams. Cannabis consumers who use weed regularly may be better off buying weed by a quarter ounce each time in order to save money. The larger quantities you buy weed, the lower the weed cost per one gram.

With a quarter ounce of cannabis flower, you may roll as many as 20 joints or several blunts.

How much is a quarter of weed?

A quarter ounce, sometimes known as a quad, will set you back approximately $50-$70. However, the dispensary owners set the prices by the THC content and quality of the marijuana flower.

Half Ounce of Weed

Half-ounce or half a zip is equal to fourteen grams of flower. For cannabis users who use less than one gram of cannabis a day, half an ounce of marijuana is enough for over two weeks.

How much is a half-ounce of weed?

A half-ounce bag costs around $100-120. If you were to divide this price by how many grams are in a half-ounce, you would find that a half-ounce of weed costs about half of what it would cost to purchase cannabis one gram at a time.

In the states where marijuana is legal, a person can possess weed weights up to one-ounce maximum. Having an amount more than this might result in jail time.

For weed weights one ounce, the cost is around $150 to $280. This is enough cannabis for a month or more worth of frequent consumption.

A Quarter Pound of Weed

A quarter-pound, also known as QP, is equal to four ounces of cannabis. That’s above the legal limit for most people, but how many grams can medical marijuana patients have?

It depends on the states you’re in.

Some states allow patients to have over a quarter pound (mass equal to 113.4 grams of weed) or enough weed for 90 days’ worth of use.

It’s a good idea to double-check the legal restrictions on weed amounts allowed for patients in your state. Patients may also create their own concentrates and edibles from medical marijuana.

A quarter-pound of cannabis costs between $800 and $1500, depending on the quality, THC levels, and where you buy it.

When you purchase weed, you may wonder how many grams are in an ounce or how many ounces are in a pound. You can look up a weed measurement chart or remember some common conversions for weed measurements below. Cannabis dispensaries may measure weed in metric or imperial systems.

Note that the cannabis measurements are rounded to the nearest gram.

An oz of weed varies in price. This all depends on where you live. Some areas charge between $150 and $220 per ounce. However, if you’re looking at top-shelf indoor-grown marijuana, you can expect to pay $240 or more for an ounce.

How many grams is an 8th of weed?

An eighth of weed is an eighth of an ounce of marijuana. Thus, the math you’d do is 28 divided by 8, which equals around 3 and a half grams. To give you an idea of what this weighs, it’s slightly heavier than a penny, which weighs around 3 grams.

If you’re going to smoke a joint per day, 3 and a half grams (an 8th) should last you around a week or longer. This all depends on how large you roll your joints, of course. If you’re smashing gram joints daily, your flower will only last three or four days.

Now that you know the cannabis measurements, you may want to save money by purchasing cannabis in bulk! Rather than buying one gram at a time, purchasing a half-ounce or a full ounce of cannabis will save you money in the long run!

Think about it this way. Your grams should cost between $15 and $20 apiece if you buy them one at a time. But if you buy an oz at a time, you’ll have 28 grams!

We hope this weed measurements guide has given you the insight you need to purchase the weed you need.

If you have any other questions about some of the most common weed measurements or buying larger quantities, feel free to reach out! We’re always happy to help!